Driven by our highly engaged people

The CAVITE-LAGUNA EXPRESSWAY (CALAX) is envisioned to be a four-lane 45-kilometer toll road that will connect the westbound Manila-Cavite Toll Expressway (CAVITEX) and the Eastbound Mamplasan Rotunda leading to the South Luzon Expressway (SLEX). It will have eight interchanges--Kawit, Daang Hari, Governor's Drive, Aguinaldo Highway, Silang, Santa-Rosa-Tagaytay, Laguna Boulevard, Technopark and a Toll Barrier before SLEX.

Currently fully operational is its 14.24 kilometer segment that stretches from Mamplasan Rotunda to the Silang East Interchange.

The expressway is equipped with an Automatic License Plate Recognition System, which enables a "barrier-less entry." It will also sport IP-based Speed Detection Cameras, CCTVs, and as it develops will feature various commercial establishments, such as gasoline stations, retail outlets, convenience stores, and restaurants, among others.

CALAX is a Public Private Partnership Project with the Department of Public Works and Highways (DPWH) as implementing agency, with private proponent MPCALA Holdings Inc., a subsidiary of the Metro Pacific Tollways Corporation (MPTC). Get to know more about MPT South here. 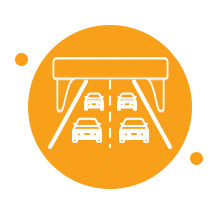 EASYTRIP RFID is a prepaid, load-based, Radio Frequency Identification Sticker or RFID attached to your vehicle's windshield that makes tollway payment automated and hassle-free. It also gives you ease of payment across all MPTC tollways in the country - Cavitex, Cavitex C5 Link, NLEX and SCTEX.

Some lanes in our toll plazas still accept Cash as mode of payment.